Lake of Fire – Hope for the Wicked One Day? – Essays in First Christianity Book

Lake of Fire – Hope for the Wicked One Day? – Essays in First Christianity 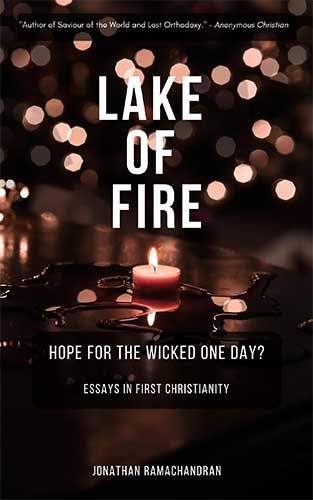 Lake of Fire – Hope for the Wicked One Day? – Essays in First Christianity

Lake of Fire – Hope for the Wicked One Day? – Essays in First Christianity book is now available in PDF.

Christ Centered Universalism has been a Hope in First Christianity among the earliest orthodox Christians as testified even as late in St. Augustine of Hippo’s infamous quote in that even he didn’t call them as heretics but soft hearted Christians who did not deny Holy Scripture.

A form of Christian Universalism by Origen of Alexandria may have been condemned by a later council. For protestants, please take note that both St. Augustine and that later council consists of members who Pray to Virgin Mary something which is absent from even Origen of Alexandria. Therefore, just because something is majority by later early Christianity it does not necessarily mean that it was First Christianity Doctrine. In light of this, we discuss various viewpoints, quotes by Church Fathers and Ancient Christian Writings in support of this Hope. Since the time lapse and loss of records to these First Christians being replaced by later Christianity is hard to trace or prove due to scarcity of evidences, nevertheless we endeavour to present as much as we can including some rarely known quotes within Christian Universalism Hopefuls itself. An example of a set of rare quotes which point to Christ Centered Universalism in this book which may not be popularly known is that by St. Hillary of Poitiers, the Champion of Trinity in the West and a set of interesting quotes likewise by St. Ignatius of Antioch who was a direct disciple if St. John the Apostle of Christ himself. We see traces of such an understanding in a quote by St. Justin Martyr toward the Wicked being made subject to obey God eventually as one child while St. Ireneous of Lyons has a few interesting quotes especially those that relate to the Concept of Ages/Aeons/Olam to come where in a particular instance, St. Ireneus clearly shows that the strongest phrase “ages of Ages” refers to the subset “ages” out of a larger set of “Ages” implying limitedness.

Just like God of Abraham does not limit God to Abraham only, the phrase God’s Glory to the Age/Aeon/Olam (singular) need not limit God’s Glory to one Age only but may be highlighting it for that Age (unknown long time period). We do not need to teach it as a 100% certain doctrine but we may hope for it as the Bible Verses can also be understood consistently to present this Hope in some Way. One Day we will know and all things are possible with God Who Alone Decides. Peace to you..